You are not invincible. (Ode to dumbasses everywhere)

My husband, God love him, fails to act his age. I realize this is probably not an isolated case. So enjoy while I sing his praises.

One fine morning, a fresh football season brought “the guys” over to prepare for the proper abusing of the PSLs. My hubby and his “bros” were all geared up (in appropriate team wear), toting coolers and groceries, talking loudly about guy crap. They were loading up the truck to make the haul down to where the chest beating, ball scratching, shit talkin’ takes place. It being one of the first games of the season had this lot in rare form.

I don’t know what happened conversation-wise to require the riding of my husband’s childhood BMX bike, but they were doing it. My kids are out laughing at them. My neighbors were too. My husband takes his turn at being the baddest ass and “I can’t watch”. So two grown men and two little boys are watching as dear husband ramps the curb, hops the sewer and bites it. “Awwww! Wow! Ouch”. Head first over the handlebars. I knew it was bad before I even turned around. I kinda wish I would have seen it. He is laying on the grass and then just pops up like “It’s ok! I’m ok!”(name that movie). He was obviously shaken. I am not sure by what, the fact that he is not 12 anymore or that he has just seriously hurt himself trying to be 12. Oh, and he hit his head, but that couldn’t have anything to do with it, right?

He staggers. He heads to the house. He stands in the bathroom trying to convince me he didn’t hit his head very hard and it’s just a hematoma on his shoulder. *in my best Schwarzenegger* “It’s not a toma”. Crickets?!?! Really? I thought that was hilarious. Fine, I’ll admit, ill placed. I digress…

So my adrenaline junkie goes to his football extravaganza, and proceeds to tail gate. Chest bump. Wait. That hurts.

Then I get the call.

“Huuuuneeee, could you pick me up? I think I’m hurt worse than I thought.” “Of course” *eye-roll* *huff* *grumble*. The kids and I gather up and head downtown (35 minute drive with no other cars on the road) to sit in baseball and football traffic and finally arrive at the corner of “major interstate” and “right in the middle of downtown”. He is standing there with this painful glare and when he slides in the car he instructs me to drive him directly to the ER. These words are not uttered by my husband lightly. Before you get all upset, his dudes were handed the tickets and told to keep him posted, they instructed him to do the same. All is not lost.

Off we go! Two major highways, one bridge closing, giant loop around detour, two antsy kids, one injured husband, an hour and 12 minutes drive time, one Xanex and 51 deep breaths later we are at the hospital closest to our home. We wait in the ER (ya’ll know what that’s like so I’ll spare ya) and they tell him his collar bone is detached and they won’t touch him. He needs an Orthopedic Surgeon!?! Yikes. 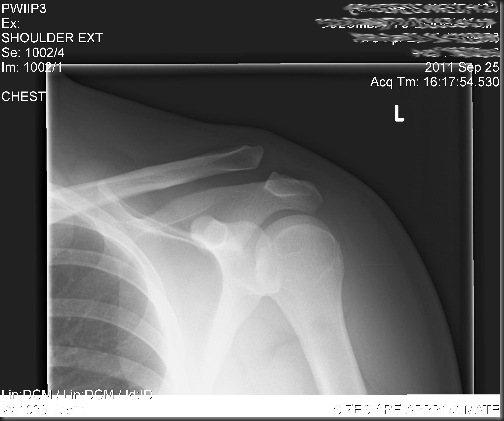 My poor hubbs had to throw all aspirations of swimsuit modeling out the window and come to grips with the fact that until he has surgery he will have a bump on his shoulder. Like Quasimodo. I know, low. But funny.

You will be pleased to know that almost two months of physical therapy and loads of time off work he is fully functioning. For those interested, the bump is barely noticeable. The only thing he can’t do is lay on his left to sleep which leaves me snuggle-less and I hate that. He has also completely forgotten any lesson there were to be had from this. I asked him to buy a skateboard for our dude’s 7th birthday and he comes home saying “man, skateboards have gotten way cheaper! I almost picked one up for myself.” REALLY?!?!? Did you learn nothing?! I would kill him, of course I could just wait and see if he does it for me.

I would like to state for the record that I have been very supportive, non-judgy, and only have half of a tongue left because I have been forced to bite the other half off. Everything happens for a reason. Accidents happen. Blah blah blah.

I am convinced this must be a chromosomal defect. The Y chromosome.

HELP! I’ve fallen and I can’t get up!

Call Life Alert. I have fallen out of the blog-o-sphere. I am having a hard time finding my way back.

Holy crap, my life has been stupid crazy lately.

We moved. We found out we are not good at moving. I picked up a new career. Hubbs got laid off. Find out new career kinda blows. Hubbs got hurt (for-the-love-of-god-that-is-a-whole-'nother-post). Two new schools start. I can’t remember the last time I read a book for grown-ups. A boy turned seven. Hallo’frickin’ween. Hubbs goes back to work, but at night. And that almost, with very large gaps, brings us up to now.

I really wanted to be a good little blogger and continually bang out witty post after witty post. Unfortunately my new Big Girl Job has me chained to a computer six hours a day and I’ll be honest, I just don’t feel like it anymore.

Then I realize how much I have missed. I have not done any sewing. I have not had any snarky rants. I read up on my faves and realize that I suck. Who do you have to blow to get Pintrest to accept you? What is the big friggin’ deal about Pintrest anyway? Reminds me of Jr. High when we used to clip pictures out of magazines and make our dream house/wedding/family. Don’t lie, you did too, didn’t you? Why can I not do something simple like pick a paint color for the dining room, or wash socks? My last project was lame, my attempt at “mumming” (don’t ask) was weak, and my car has had one headlight for like a year.

I need to have a good old fashioned “get your big girl panties on and get over it’ lecture handed to me. I’ll try. I will.

So in the spirit of things I vow to post immediately after this one with a story about the Read-Todd-Did man I married, shower, take a yoga class, and suck it up.

Emilie Glyn
I am a devoted wife and stay-at-home Mom trying to get something right today. I care for three beasts, one of which walks on all fours. In our house we fight cancer, laugh 'till it hurts, cry without notice, and never tell a lie. Me personally? I am a little bit crafty, a little bit sassy, and a procrastinator who's imagination always gets the best of her. Enjoy and drop me a line to let me know you're out there.

What is up with that name? Find out HERE!